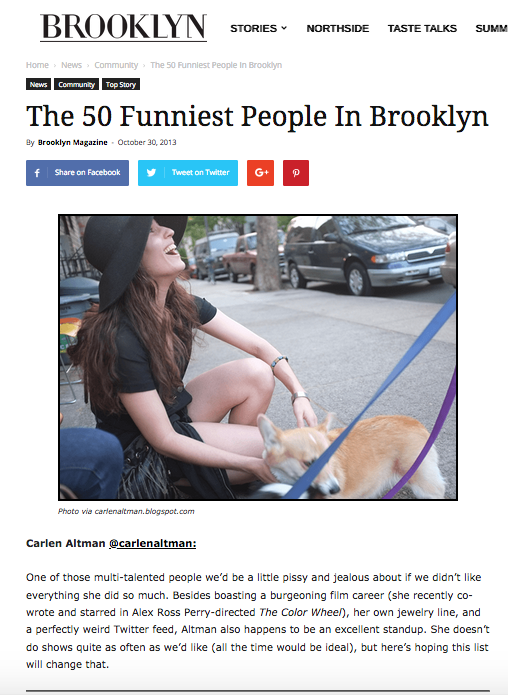 HELLO! Do you like to laugh? Well then you've come to the wrong place!
JK! Wow I'll be here all night, folks!

Carlen is currently based out of Los Angeles/sometimes deep in a forest, and spent the past few years in NYC doing various comedic-things and non-comedic things.

She has been listed "Top 50 Comedians To Watch in Brooklyn" along with "Top 25 Artists Under 25" in Interview Magazine, "25 New Faces of Film" by Filmmaker Magazine and "30 Rising Stars Under 30" by Refinery29 (SO MANY NUMBERS!!!!), and has performed standup comedy all around, including on MTV, at Caroline's NY, and the Traverse City Film and Comedy Festival. She previously co-hosted the comedy/variety show Street Meet at CakeShop in NYC and can be seen on HBO's High Maintenance, Season 1.

She has comedic training from various institutions such as Upright Citizens Brigade and The Pit along with Gotham Comedy Club.

Carlen took a hiatus from comedy from 2013-2019 (long interview on SheShed Comedy Podcast here) to focus on making her own films, working at MTV, trying to save her comedian father from cancer using holistic means, and healing from anxiety and antidepressant usage.... She "succeeded" at a few of these and learned from all!

She recently performed in the comedic musical "Swingers from Memory" at Lyric Hyperion Los Angeles and is working on an entire new standup comedy set all about her journey of healing and awakening these past few years, along with fun topics like globalism, the pharmaceutical industry, conspiracy theories, and more! FUN? Stay tuned!


Here is a sample of my CoMeDy. The rest is on Youtube and Instagram! Here I am performing standup at Carolines NYC introduced by comedian Jeff Garlin, who I toured with at the Traverse City Film and Comedy Festival.